We’re Proud of our Rich Heritage

Just ask someone to name an airgun company and chances are excellent that the first name that comes to mind will be Daisy. For over 125 years, more Americans have taken their first shot with a Daisy BB gun than any other brand.

The company is very fortunate to have been able to retain some very old board records and documents which have helped us to understand, value, and be able to preserve our history. 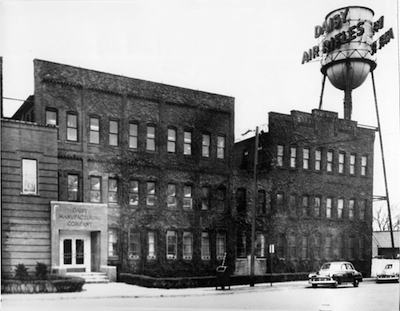 A Daisy of a Name

In the late 1870s Clarence Hamilton, a watchmaker and inventor, moved from Ohio to Plymouth, Michigan. He set up shop in the front window of a drug and jewelry store, where he repaired watches. One of his inventions was a vane-less windmill and he began production of it in a shop near his home about 1880. In 1882 he built a two-story, 8,000 square foot building, formed the Plymouth Iron Windmill Company and began production of the windmills.

By the mid 1880s the business was struggling. Transporting the heavy steel windmill by wagon throughout the southern part of Michigan, northern Indiana and Ohio was impractical. In January 1888 the board met to consider closing the company. The motion to liquidate failed by one vote, that of general manager Lewis Cass Hough.

Around the corner from the windmill company, Hamilton also operated the Plymouth Air Rifle Company, producing a wooden airgun to compete with the one being manufactured by the Markham Air Rifle Company.

On March 6, 1888, Hamilton approached the windmill company with an all-metal airgun of his own design. He chose to take it to the windmill company because they had blast furnaces and they were equipped to mold and stamp the metal parts necessary to build his gun. The gun was passed around to members of the board. General Manager L.C. Hough test fired the gun and exclaimed, “Boy, that’s a Daisy.” ‘”It’s a Daisy” was a colloquialism of the time.) So the little gun was named Daisy.

Legend has it that the board of the Windmill Company decided to build the gun and offer it as a premium item to every farmer who purchased a windmill.

By 1895 the sales and popularity of the gun had grown to the point that the company ceased the manufacture of windmills, began producing airguns exclusively and changed its name to Daisy Manufacturing Company.

The Markham Air Rifle Company was established in July 1886 in a small two-story factory in Plymouth, Michigan. The Markham Chicago model was the first financially successful BB gun. When the founder of Markham decided to leave Plymouth in 1912, he sold his company to two Daisy executives. They changed the name of the company to King Manufacturing Company in 1928, and Daisy acquired King Manufacturing in 1931.

No history of Daisy would be complete without including the early years of the Plymouth Iron Windmill Company, the first premium gun and the acquisition of the Markham Air Rifle Company.

Of course, the company moved to Rogers, Arkansas – the city we still call home today – in 1958 and a lot of BBs have rolled out of the barrel since then. We still dominate the airgun category with tried and true models like the legendary Red Ryder as well as innovative new high power PowerLine air rifles, air pistols, and a line of Avanti air rifles and pistols for training and match competition. And, we license the Winchester name to create a line of Winchester Air Rifles and pistols which live up to that legendary name.

If you’re interested in a more complete history of Daisy, we’d encourage you to order a copy of the 2006 reprint of the 1976 book, It’s a Daisy and a copy of the 125-page hardbound, full-color book, Daisy. It All Starts Here, both available through the Rogers Daisy Airgun Museum, www.daisymuseum.com

Thanks for taking time to read about our colorful history and, for those of you who have learned to shoot or taught someone to shoot with a Daisy, thanks for being a big part of it.